I’ve listed this as ‘dystopian future’, but the fact is it’s not really that dystopian or futuristic: it really just explores what might happen if Trump’s anti-Muslim policies are allowed to reach their full potential.  The result is essentially a Nazi style round up of innocent Muslims from their homes, in order to keep them in internment camps – the long term goal is not specified, but we are clearly meant to take our knowledge of history into the story with us…  Seventeen year old Layla is one of the unlucky ones, taken shortly before her eighteenth birthday to a camp in the desert.   She manages to forge a connection with a guard who is part of the resistance, and he helps her stay connected with the outside world, essentially becoming the voice and face of the rebellion.  The book doesn’t have an especially high kill off rate, but it’s effective in the way it carefully doles out violence.  The message is as clear as it is chilling: if we don’t act now to stop this sort of facism from rising once again, it might soon be too late. 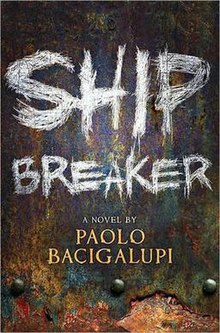 I’m feeling a bit blergh about my boy book quest, partially because so many of the recommended books are dystopian fiction and it’s not my favourite genre. I did quite enjoy this one though, and for the most part its fast paced and really well thought out. The writing is beautiful and the character’s are well-drawn.  It centres on a kid called Nailer, who works in the dark hollows of abandoned ships to pick out precious metals and other materials, for resale to the new version of these boats, ‘clippers’.  After a “city killer” storm, a clipper washes ashore and onboard Nailer and his best friend Pima find a young woman who is barely clinging to life. They choose to save her instead of chopping off her fingers for the gold she’s wearing, and things take a scary turn from there. Nailer’s own father is a drug addict and alcoholic, who has no hesitation in taking his own son prisoner if he has to, to claim the money that comes from the find.   The story follows Nailer’s escape with the girl, Nita, into a scary and unknown world, on the slim hope that she might be able to find her people and they can both be saved.  I suspect some of the boys I teach might be quite into it, so this is definitely a book I’m going to field test before I write it off! 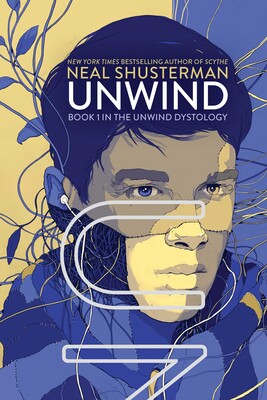 Talk about an unnerving read! This rather horrific novel is about a dystopian world in which abortion is no longer legal – following a “heartland war” spurred by the issue – but parents can make a choice when children are between 13 and 18, to have them “unwound”. This process means the child is not technically dead: their body parts are all separated and almost 100% of them are reused on other people needing donations.  Horrific.  But so well told… It follows two teens due to be unwound who escape, taking a sacrificial lamb called Lev with them.  As the book unfolds we come to understand how the decision was made to use this procedure, what it involves, and the real long term impacts.  Trust me when I say you won’t be able to put it down, and then you won’t be able to forget it!

So this was absolutely awesome. I can’t tell you anything other than that because it will ruin the ending of War Cross, the first book, but suffice to say, it was definitely worth the read.

I’m entering a new era as I have a new job, and my goal for the year is to find books that might appeal to (wait for it…) teenage boys.  This was the first recommendation I received when looking for a book about gaming, and I have to say I enjoyed it a lot and have already ordered the sequel through the library. (Although I’m definitely cheating because when I got it home, I discovered the protagonist is actually a kick-butt girl, so right up my alley!)  The main character, Emika, is essentially an orphan who has been making ends meet with a low paying waitressing job, and some bounty hunting for the police on the side, as crime is out of control.  Her secret passion, though, is a worldwide phenomenon called ‘War Cross’, a game played through glasses that pick up on the brain’s thoughts.  Emika comes to the world’s attention when she accidentally interrupts the opening round of the War Cross world championships, and is quickly recruited to headquarters by its secretive inventor, Hideo Tanaka.  She has to track down a dark force in the game who appears to be plotting something huge and awful to go down during the championship final – but who and why are questions Emika must answer before time runs out… This is a fun read that will appeal to both boys and girls, I think, but for very different reasons.  I, for one, can’t wait to read the next installment!

As I’ve mentioned before, I am the most awful coward.  This book is, on balance, more intriguing, and actually quite funny, than it is scary.  But that did not stop me checking my wardrobe at least twice every night before going to sleep while I was reading it! (My husband was enormously entertained.) The story is set in an America led by a slightly unhinged, reality TV star president (sound familiar?).  He has approved the installation of a “prison” called Alcatraz 2.0, in which people convicted of terrible crimes are moved to a guarded island where they are tortured and murdered by masked serial killers, and the whole thing is live streamed for profit.  Needless to say, this show is a *huge* hit! But it’s pretty clear something fishy is going on, as over time the convicts are getting younger and hotter.  Way, way hotter.  In addition, when the protagonist, Dee Guerrera, arrives, everyone she meets claims to be innocent – just like her.  After surviving her first attack, Dee befriends a group of other young people, and they work together to try and not only survive, but also uncover what is really happening behind the scenes. Overall it’s a compelling read, even if it did stop me getting a good night’s sleep! 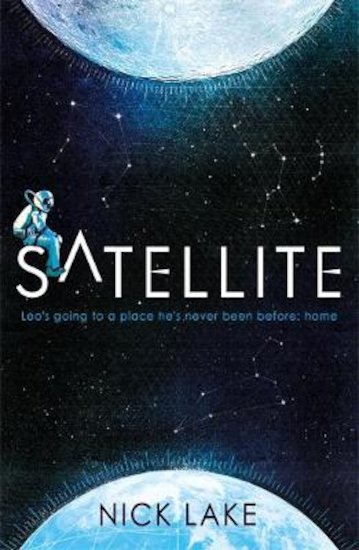 Ever since I saw the film ‘Interstellar’, I’ve become slightly fixated with stories about people living in outer space. I keenly watched ‘The Martian’ and ‘Space Between Us’, hungry for more of this weird hybrid life.  Satellite has a lot in common with these films, especially ‘Space Between Us’, as they are both about a boy born in outer space who comes down to earth.  ‘Satellite’ was a deeply satisfying read for me, because it gave some in-depth thought to not only what life in outer space would be like – it really considers Leo’s mental state – but also what the impact of shifting down to earth would be on the body.